So let me just start this off by confessing my deepest frustrations with Pinterest. It’s been a while since I’ve DIYed something I saw. While I was in the process of making this cake, I remembered why I stopped doing Pinterest Projects. I can’t handle the pressure. I get angry when things don’t turn out just like the pins. Ever see those #PinterestFail pictures? There is an entire community of people that are brave beyond measure, who have taken their Pinterest Fails and posted them for the world to laugh at.  Google it if you’re having a bad day. You’ll thank me. You’ll laugh until you cry, or pee. I guess that part depends on your personality and your level of voluntary muscle control.

Here’s my story. I was going to a baby shower and my mother-in-law thought it would be a cool project for me. Never having done this before and forgetting about my love-hate-relationship with Pinterest, I thought, yeah, definitely looks simple enough! For the most part it was. I read a lot about how other people did their cakes and combined the parts of what I thought would work for me.

Everything in this picture is from Walmart. They’ve got great quality for the price, and also, it’s 1.5 miles from my office. Winner, winner, chicken dinner. Alright, so, get yourself a box of diapers. I think there are 189 diapers in one box, which is approximately a one-day supply for tiny people on an all liquid diet. You’ll also need some cute baby things to decorate the cake, and ribbon. (NOT PICTURED, BUT VERY IMPORTANT: Some from of string. We’ll get to this.)

Step 2. Get a base. One of the first things I read is that you’ll need a base. GOOD ADVICE. You’ll need a huge piece of cardboard or something sturdier depending on how hard you go on decorating. These cakes get HEAVY.

I used half a Chewy.com box from Duke and Duchess’ food. The other good piece of advice I found was to use a paper towel rolls as your center support. Tape that down to the cardboard so it doesn’t move while you’re building.

Step 3. Here’s where things got real.

Come to find out, you don’t just line them up and then wrap the ribbon around them. No, no! This is the step where I discovered lies and deceit. Your bottom layer is going to be around 80 diapers. At one point I forgot what I was doing and thought I was playing dominoes. Do you know what it’s like to have 80 diapers falling all over the dining room floor and trying to keep the dogs from stealing them? I must have said “don’t touch that” and “drop that right now” at least 10x. Also, you need to put this section upside down. The part that goes around the baby’s waist is not strong enough to hold the diapers upright, thus, the diaper avalanche all over the floor. So I re-strategized my plan since everyone on Pinterest is a liar. The picture above was the most diapers I could get together without them falling all over the place. There are about 20 in the picture above. 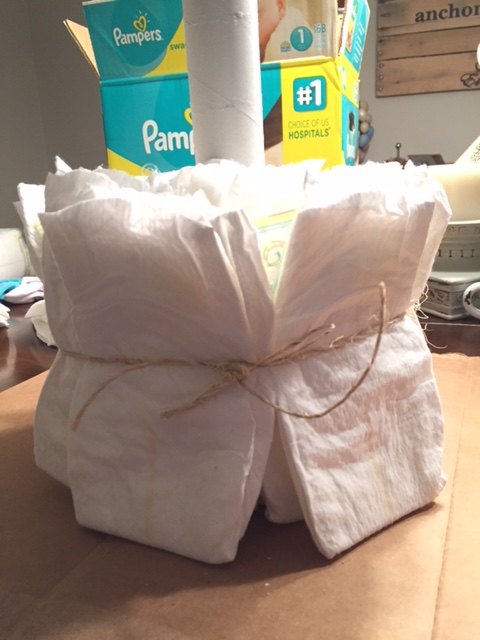 I don’t remember why we had twine, but this saved my butt (see what I did there?). Wrap them up really tight because this will help condense all the diapers and give you a nice, firm BOTTOM 😉 to keep building on.

Now, you can flip them back over and start making a nice crisp, layered look. At this point, I realized the twine was going to be the best thing ever, so I wasted no time tying up this layer. You might need an extra set of hands for this. All these diapers are a lot to hold in place and tie at the same time. I enlisted Brian’s help for this part. After I got it knotted I went back and filled in any spaces with extra diapers. The top layers will sit much nicer if your bottom later isn’t crappy (couldn’t help myself). 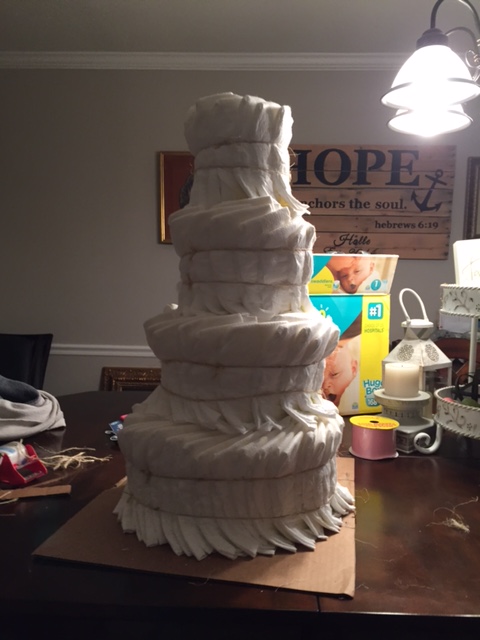 So it’s starting to look like a cake, but it’s not as neat at the ones I was trying to mirror it after. I think my biggest issue was that I used every diaper. Most people made smaller cakes and kept diapers to the side. But this looks like organized chaos and I thought that was kind of ironic 🙂 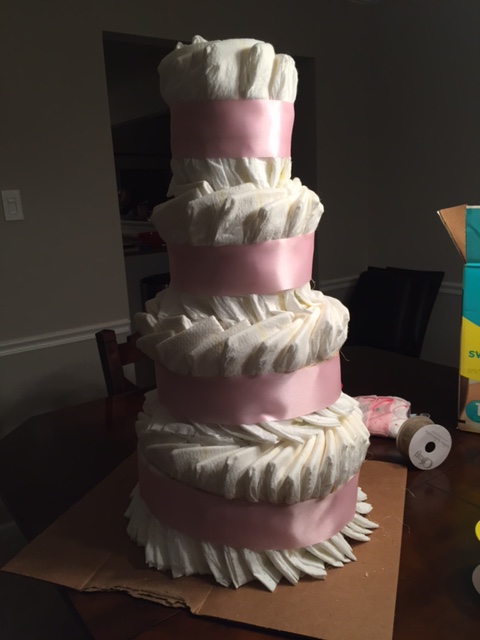 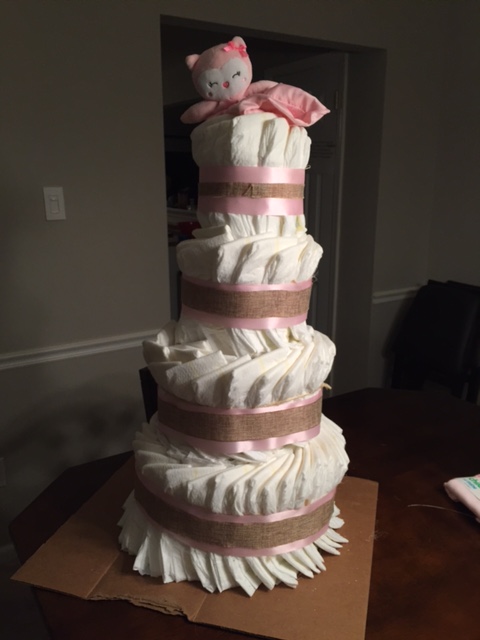 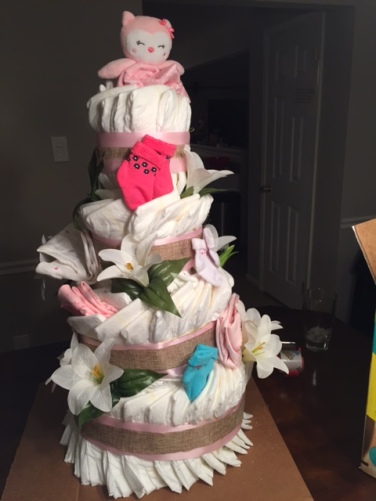 You might need safety pins to hold your little baby items in place. The flowers were a fun add because they hid some of the imperfections that were driving me crazy. When you’re happy with the look, or you feel like it’s as good as it’s going to get, cut away the extra cardboard!

Here it is in all of it’s baby girl glory at the shower! It actually came out pretty nice. 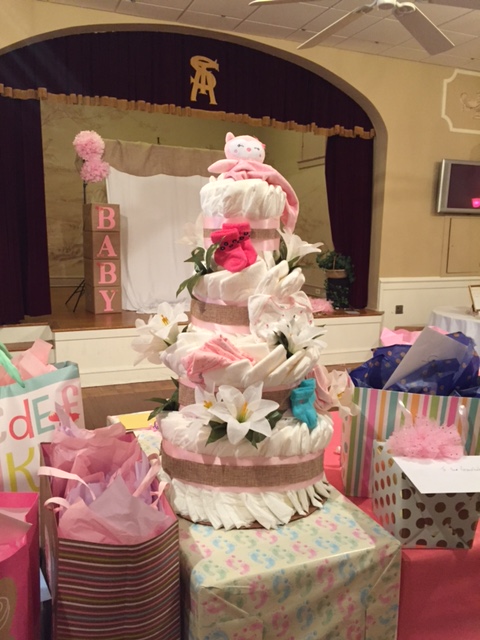 For the most part this was a fun DIY after I got over being lied to by everyone who has ever made a diaper cake before. This was definitely outside of my wheelhouse, but it was a nice brake from house stuff!